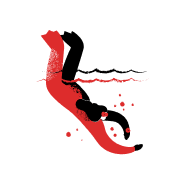 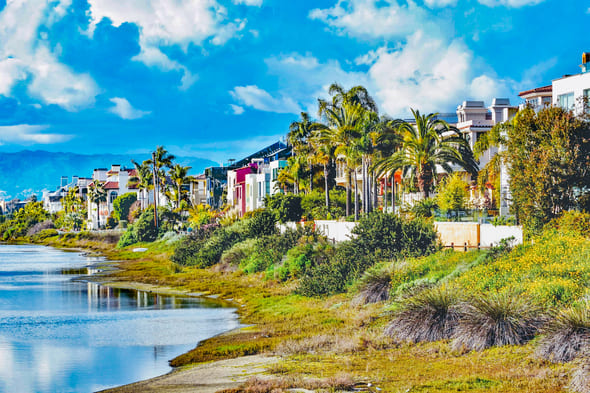 Marina del Rey is a nice suburban city in Los Angeles County and easily one of the best places to live. This city has a population of about 10,000 residents. When living here, you can experience the feeling of being in a densely urban community while being surrounded by many different coffee shops, parks, and restaurants. This area tends to be on the more liberal side of politics and many young professionals live here.
This area is right near the Pacific Coast so all of the residents here enjoy a nice, waterfront location that connects them to the rest of the city.
Although this residential area is known to be more quiet, many of the residents take advantage of the attractions that are in very close proximity to the neighborhood. It will only take you about 30 minutes to get from Marina del Rey to the beach area in Venice. There are plenty of shops and galleries that will be conducive to everybody’s taste.
There is a beautiful bike trail called the Marvin Braude Bike Trail that runs from Marina del Rey to Santa Monica. Santa Monica is a bit farther away than the beach in Venice, but the bike trail makes this a quick 20 minute trip. This is a 22-mile paved route that displays the most beautiful portions of the Los Angeles coastline. Also, an enormous plus is that there is no car traffic on the bike trail so you can reach your destination in record time.
If you do decide to brave the traffic, downtown Los Angeles is only about 30 minutes away with intense traffic and 60 minutes away with it. Also, Marina del Rey is extremely close to the Lost Angeles International Airport so if you’re a resident who also loves to use the airport to travel the rest of the world, Marina del Rey is the perfect spot for you.

The median price for a home here is about $598,400. This value is significantly lower in price than many of the other prestigious neighborhoods in Los Angeles County. Based on the most recent United States Census, most of the people living in Marina del Rey are young and female.

The History and Safety of Marina del Rey

As is with most areas in California, this city receives amazing weather all year-round. On average, only about 13 inches of rain fall in this city a year. This is about 25 inches less than the United States average. Moreover, there is never any snow in Marine Del Rey while the United States average is about 25 inches. If you are someone who truly loves the warm weather, then this community will welcome you with open arms and short sleeved shirts throughout the entire year. 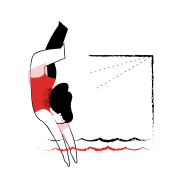 The number of outdoor activities you can enjoy in Marina del Rey are truly limitless. There is plenty of fun awaiting you on land and even in the stunning water as well. There is extremely easy access to the ocean in Marina so you and your family will have no problem finding plenty of aquatic activities to enjoy together. This is a great place to make the fun memories that are going to last you a lifetime. Some of the on-land activities include walking around waterfront parks, riding along the beachside bike paths, and taking in the breathtaking views while enjoying scenic tours with your loved ones.

This amazing beach is located only 3 miles south of Playa del Rey. The 3.7 miles of shoreline is extremely inviting to any guest who wants to enjoy the scenery. Additionally, this beach has over 2,000 parking spaces for regular vehicles because so many people frequently enjoy the cozy firepits and illustrious RV parks this beach has to offer. The coveted path for airplane departures out of LAX is located right above this large, sandy beach. Families in attendance are able to enjoy the stunning views of airplanes flying over the Pacific Ocean.

This 10-acre park shoots out from the main channel and offers visitors a beautiful lot of land within the harbor. The Burton W. Chace Park provides one of the best viewing areas in the entire harbor. There is a wonderfully paved walking path located right around the perimeter of the park if you want to take a morning or even an evening stroll to take in the sights. Also, there are benches located all around the park so you can take time watch the sunset that falls behind the magnificent, sparkling water. When you are ready to slow down for a while to grab a bite to eat, there are plenty of uncovered tables and picnic pavilions that will provide you with the perfect spot to chow down.

The Marina del Rey Wetland Park is located on Via Marina and Tahiti Way. This tidal salt marsh is 0.75 acres that includes a nice habitat for the plant species that were able to comfortably adapt to the wetlands. Recently, this area was restored by The County of Los Angeles and it is submerged by the large tides that take over the land routinely twice a day. During the restoration process, The County of Los Angeles wanted to make the Marina del Rey Wetland Park a more enjoyable experience for visitors. To accomplish this task, they added observation areas, educational signage, and walking paths so everyone could enjoy this incredible ecological resource.
Some of the shorebirds such as sandpipers and plovers can be seen by those visitors who walk by the park. Also, the wading birds like herons and egrets as well as the waterfowl such as ducks and geese are all sights for visitors to see as they pass by. In the past, this site was part of the Ballona Wetland complex where it was able to inhabitant other natural creatures such as birds, fish, and ducks.

There are plenty of chic and stylish boutiques located within the area. Some of the most common beauty hotspots such as Sephora and DryBar can be found just a few paces away from the edge of the sparkling water.

In the entire city of Marine Del Rey, this is the largest shopping center you’ll find. There are attractions for every kind of person. Whether or not you want to spend the whole day shopping or go to nice restaurants, the 70 stores lining this area will provide some kind of entertainment for everyone.

Similar to Villa Marina Marketplace, this area is also a frequented shopping center. There is a large variety of clothes, accessory stores, and jewelry here as well. When you are ready to take a break from shopping, you can enjoy the many different dining options here as well.

As is to be expected, there is always something to do at night in Marina del Rey. You can enjoy a nice cocktail by the water or go on a dinner dance cruise to dance the night away with your friends and family. There are also plenty of outdoor firepits for you to cozy up next to when you’re ready to just relax and enjoy the stars for the rest of the evening.

The school systems within the city of Marina del Rey are classified as above average. This is a great place to raise a family given you can feel confident that your children are going to receive a solid education from one of the most popular school districts in the city. Some of these school districts include La Petite Ecole – Le Lycee Francias de San Diego and Los Angeles Unified School District. Within these two school districts are some amazing public schools that your children can attend to get a great education. Some of the best public schools in Marina del Rey include High Tech Los Angeles, Los Angeles Center for Enriched Studies, Orange County School of the Arts, Citizens of the World Charter School Hollywood, Goethe International Charter School, Downtown Magnets High School, and many more.